A little over a week ago, I finished up my run-through of Avadon: The Black Fortress. 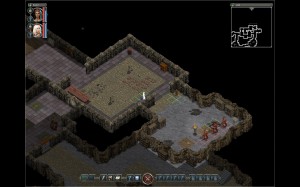 Avadon is a third-person, isometric, turn-based RPG in a Fantasy setting.

The titular Avadon is both a fortress (as it says in the title) and an organization. In Avadon’s world, four powerful but beleaguered kingdoms decided to band together for common defense against various outsiders–Ogre, Titans, Dragons as well as other kingdoms. These four kingdoms needed a way to exert their combined military might and to maintain their own internal peace. To that end, they created Avadon–a place filled with the most powerful people with nearly unlimited authority to act to ensure the survival of the alliance.

When the game begins, the player is dropped in as a new recruit to the fortress at a moment of crisis. The fortress is being set upon by outside forces that are organized and powerful. Though they have been rebuffed at every turn, the attacks have taken a toll on Avadon–lost people, strained resources, angry allies.

Everything that makes Avadon compelling is in it’s story and the unfolding of the truths of it’s world as the game progresses. Perhaps most central is the notion that Avadon makes its own morality. More succinctly, what Avadon decides must be in order for it continue to be. The implications of this fundamental tenant drive the plot.

From a gameplay perspective, however, Avadon leaves something missing. The style of the game’s interface reminds me of the old Fallout games–top down, isometric view; action point-based turns. Though it doesn’t have guns like its ancient predecessor, it does have crazy special abilities and spells to balance things out. Character gain experience through quests and combat and get more powerful via a skill-based leveling tree. Its a system that has largely been seen before–not outstanding but certainly adequate.

Where I have to complain about Avadon is in its overall difficulty balance. Rather than feeling like a steady progression as the game goes on, there are periodic, sudden, and often overwhelming spikes in difficulty. Sometimes, these are almost reasonable–attacking an enemy stronghold should be hard–but more often it is due to enemies simply being immune to one of the core damage types. Though fire elementals being immune to fire damage seems reasonable on its face, when an entire character class (the sorceress) uses fire as its default damage type you’ve gone from “seems reasonable” to “completely and utterly terrible game design”. This is even worse when the immunities are not obvious from enemy names or models or when an enemy is immune to more than one of the core damage types. At that point, we’ve descended into trial-and-error gameplay. Unfortunately, damage immunities are all too common and almost always result in a press of the quickload button when found unexpectedly.

While the game has its flaws, I think they are largely worth overlooking. The story is interesting and compelling enough that I kept being drawn back in even though I would occasionally throw my hands up in frustration.