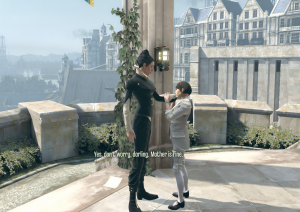 The Empress and her daughter enjoy Corvo’s welcome home.

Whenever I’ve played an Assassin’s Creed game, there’s been one thing that I wished that I had: the ability to teleport. It seems that someone else was thinking the same thing when they decided to make Dishonored.

Dishonored follows a rather straightforward premise: Corvo, the mute bodyguard to the queen, is framed for her murder. Following a show trial, unknown allies help him to escape from prison whereupon he is pulled into a scheme to topple the new rulers and find revenge. Along the way, of course, he is first given state of the art weapons by a discredited scientist and magical powers from the mysterious supernatural being called the “Outsider”. 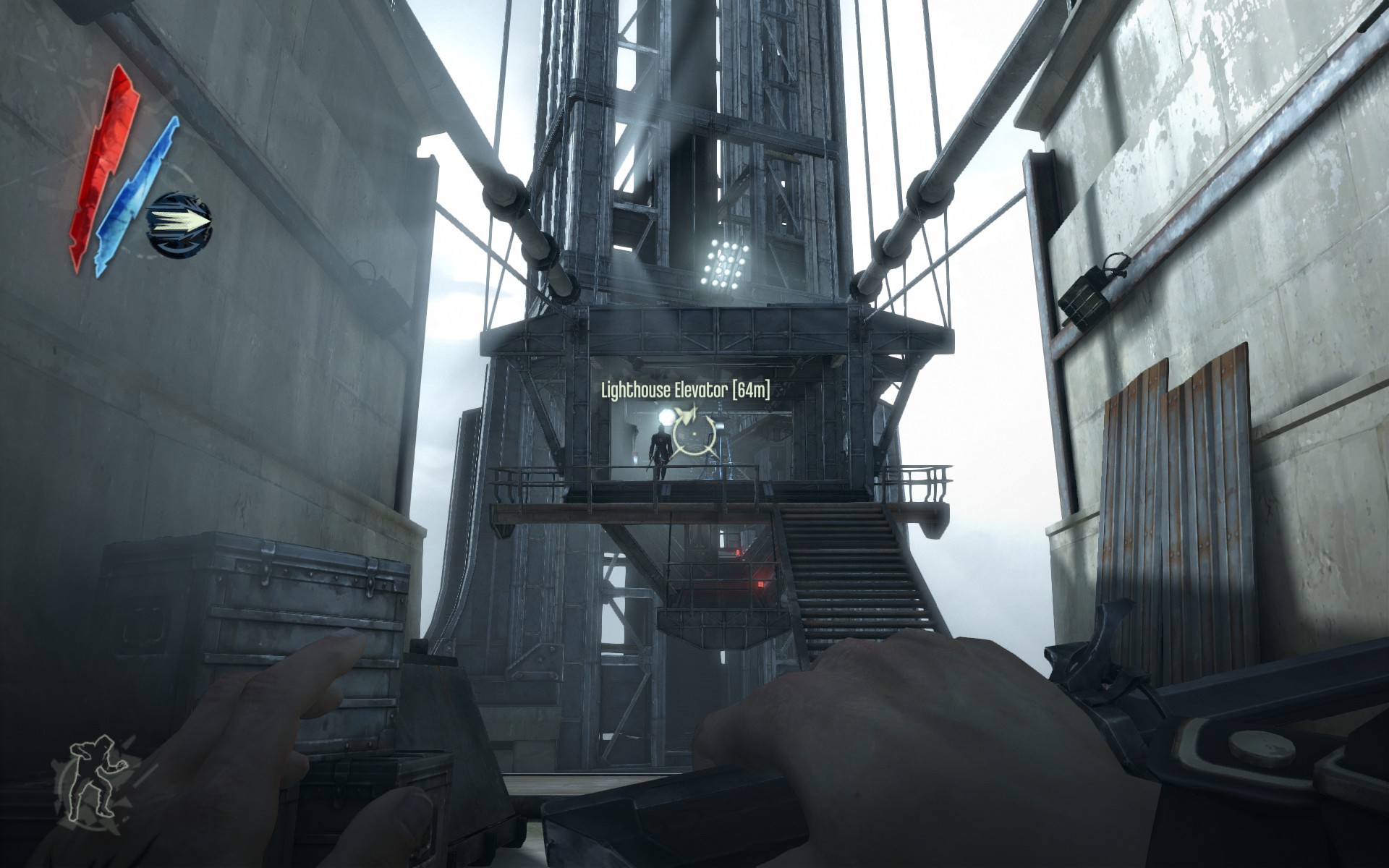 So, we need to cross the bridge. Options: 1) go across the main deck, fight past guards and automated defenses; 2) sneak under the bridge and reprogram the automated defenses to attack the guards; 3) teleport on top of the nearby buildings and run across the outlying support wires; 4) possess a guard and walk out to the other side

Magic and weapons alone don’t make an interesting game. Interesting games are about choice. Here, I am of two minds about Dishonored. The main plot drags you along with very little in the way of choice: go to that place, kill that man, etc. At the same time, though, you’re often given an exceptionally large number of ways to carry out those tasks. In a sense, it reminds me of the original Deus Ex just in the sheer number of options. This is probably where Dishonored is at its best. 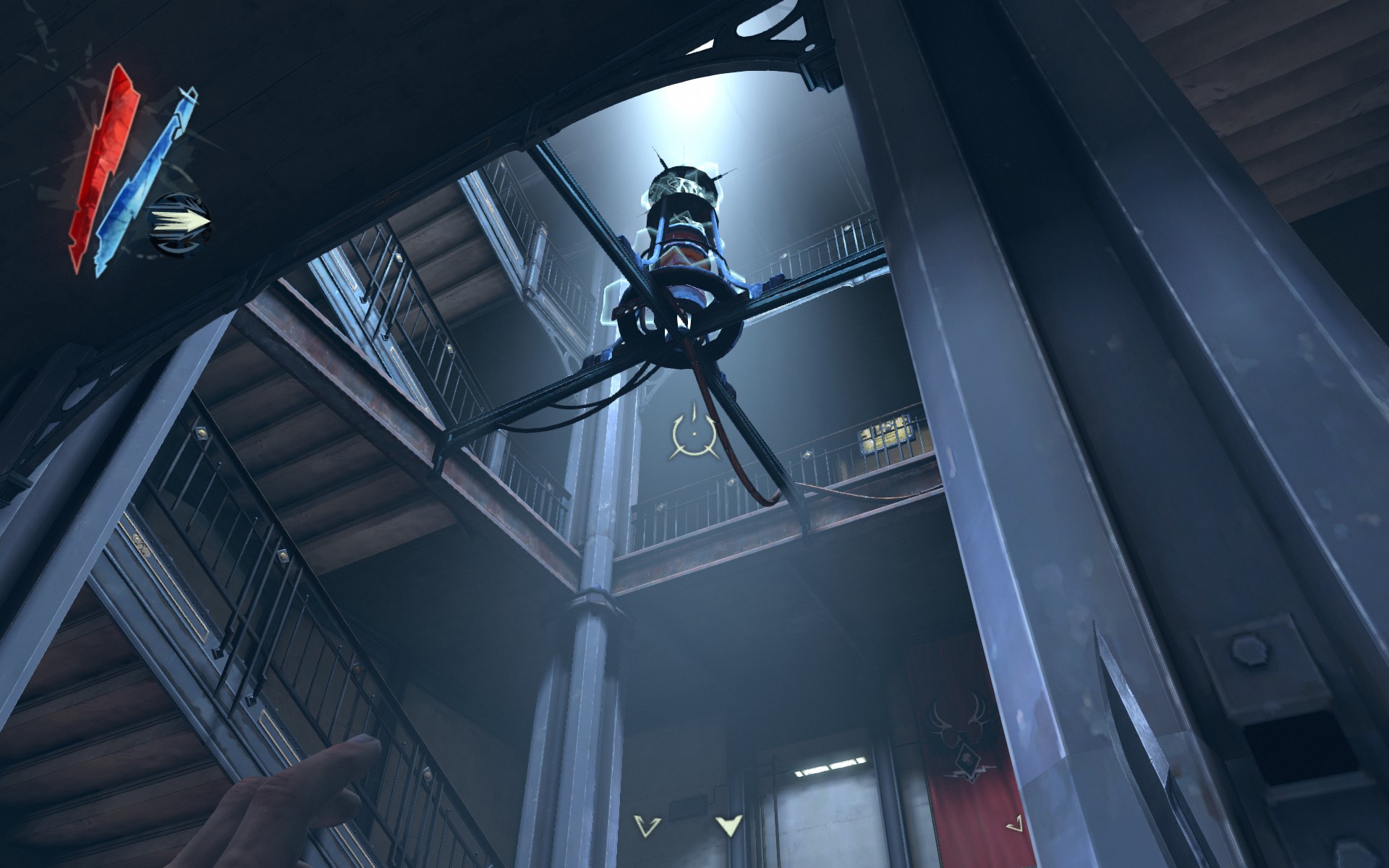 Tesla coil death traps. Why’s it always got to be lightning? Also, I’m pretty sure OSHA doesn’t like having these installed in the stairways.

Working in beautiful symmetry with choice is the writing. Although you are nearly always cast as an assassin and sent out with murder as your objective, killing is never a necessity. Every mission offers a non-lethal method of neutralizing the targets presented. Of course, merely knocking a high-ranking assassination target unconscious would be woefully insufficient. Instead, the game offers cruel and ironic fates to those you let live. In a sense, the game offers you the choice of justice or vengeance and makes sure that justice is a worthwhile option. 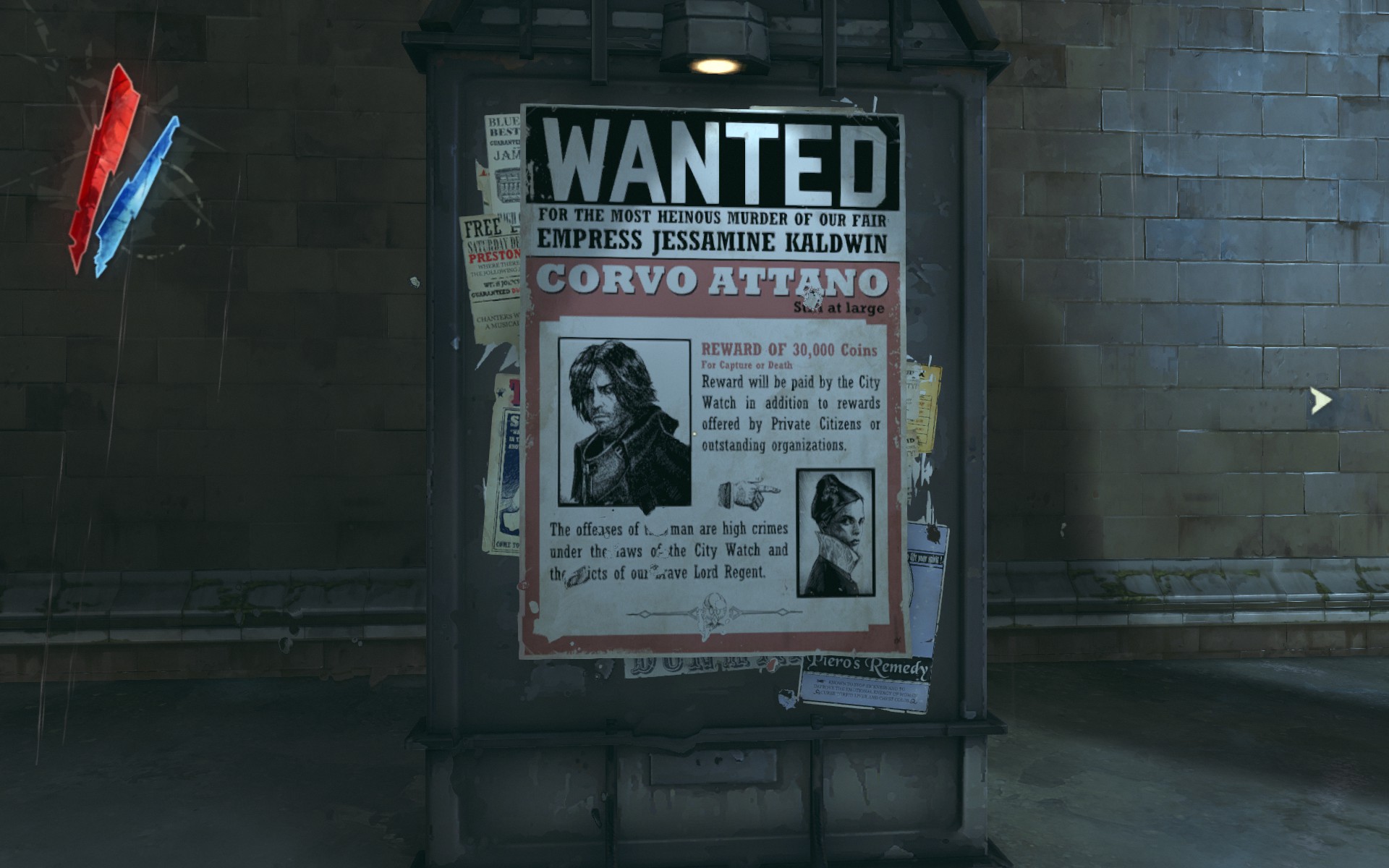 These wanted posters are they only way to know what your character looks like. I’m a bit dubious of that Emo haircut, though…

Although the plot and setting are both quite interesting, Dishonored does fall into one of the classic traps of gaming–the silent protagonist. Corvo–the character you’re playing–never speaks in game. In fact, the only times you see his face over the entire course of the game are a few times on wanted poster and once during the ending sequence. This situation would probably be fine, but Corvo is imbued with many traits that we don’t necessarily see in him due to this perspective. Perhaps most of all, we don’t see what made the Empress and her daughter both care for him they way they do. This is much the same trap that the original Dead Space fell into.

Its rare that I want to play through a game a second time with a completely different playstyle. On my original pass through Dishonored, I went out of my way to ensure that I didn’t kill anyone (that “Clean Hands” achievement looked interesting), but I feel a desire to play it again with a more…vicious…methodology to see how the game changes in reaction to it. The fact that I’m drawn to play it again says volumes about my assessment of it.