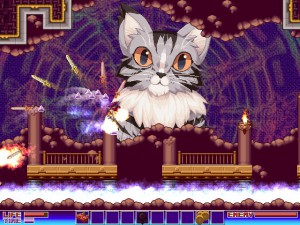 Cats are evil and responsible for the Thermomewclear holocaust.

When I play Metroidvania games, I tend to prefer the Metroid part of them–exploration, finding upgrades, etc. The ‘vania bit tends to focus more on proficiency which might otherwise be called “punishment for failure”. Bunny Must Die! Chelsea and the 7 Devils is a game firmly entrenched in the ‘vania camp.

Bunny has an silly, excuse plot. Our protagonist–a girl in a bunny suit–was cursed to have cat ears (in addition to her bunny suit ears). In order to remove the curse, a different magical bunny whisks her away to a dungeon where she is supposed to be cured, but instead the magical bunny gets stabbed by a bull (who is never seen before or again) and bunny is left trapped in the dungeon alone. 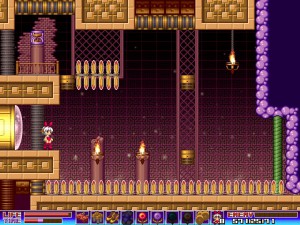 Bunny feels like a game out of time. Though only published in 2006, the controls feel like they are straight out of the original Metroid–rough, limited, and sloppy. For instance, the game has two “jump modes” you can either jump up, which is a slightly higher jump, or you can jump at a 45 degree angle. There’s no gradation in between. After much play, the difference becomes clear, but this sort of control scheme isn’t what I would expect from a modern game. Similarly, our protagonist will eventually unlock wall jumping which is just as frustrating with its narrow timing windows and arbitrary failures to activate.

The game’s internal screenshot button makes Bunny give a peace sign. She is unworried about the boss mere inches away from her.

Frustrating gameplay and a barely existent plot make if impossible to recommend Bunny Must Die. Though the game has some occasional moments of humor, they couldn’t make up for forcing me to spend hours becoming incredibly efficient at the broken controls just in order to advance.

Bunny Must Die! Chelsea and the 7 Devils: 0